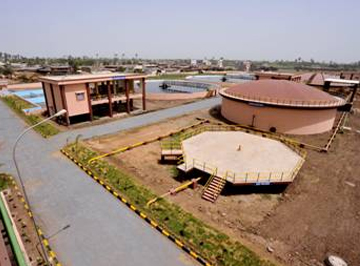 The work of laying of sewerage network for Katargam-Tunki, Katargam-Ved and Dabholi-Singanpore, has been already commissioned May 2004. It covers the 21 sq.km. area of the north drainage zone.

The pipe laying work is under execution in rest of the North drainage zone area, i.e. Mota Varachha, Utran, Kosad, Amroli, Chhaprabhatha, and Variav. It is expected commission these sewerage networks by end of 2013.

For a total of 202.0 MLD sewage expected to be generated at the end of design period, it has been planned to construct a sewage treatment plant, based on the Conventional Activated Sludge Process, in two phases. The existing Singanpore STP with a capacity of 100 MLD is under operation since 2003. As per the master plan, works on augmentation of the capacity of the plant from 100 MLD to 160 MLD will be taken up during 2011-13. 1.0 MW biogas based power plant was commissioned at Singanpore STP in March 2008.

Back to Top of the Page