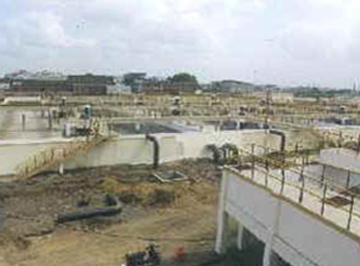 In this zone 76.88 percent of the area & 92.12% of population has been covered by the sewerage network. While sewage is treated in the 120 MLD capacity sewage treatment plant at Bhatar and 25 MLD capacity sewage traetment plant at Khajod and the treated sewage is disposed off into the Kakra khadi. In the area bereft of the network, the sewage along with wastewater from local small-scale industries is being discharged into the River Tapi/Kankara khadi through storm water drains or is being disposed through septic tanks and cesspools.

The sewerage network of Athwa, Nanpura, Khatodara and Umara were laid back in 1980s and 90s. As per Master Plan, the network within Athwa and Umra will be rehabilitated during the year 2009-12. The sewerage networks in the area of Vesu, Rundh, Magdalla are commissioned recently. In rest of the area of South-West drainage zone, it is planned to provide decentralised sewerage system to the underdeveloped and developing area, since it has scattered inhabitants as well as huge agricultural zone and air port land within the zone.

The Sewerage system for New South West Drainage zone, having area about 26.08 Sq.km, has been planned under National river conservation plan (NRCP).

Total cost of the project for Phase - I (upto year 2029) is about 137.70 Cores. There will be 8 nos of pumping station and 2 nos of sewage treatment plant having capacity of 53 MLD.

Back to Top of the Page